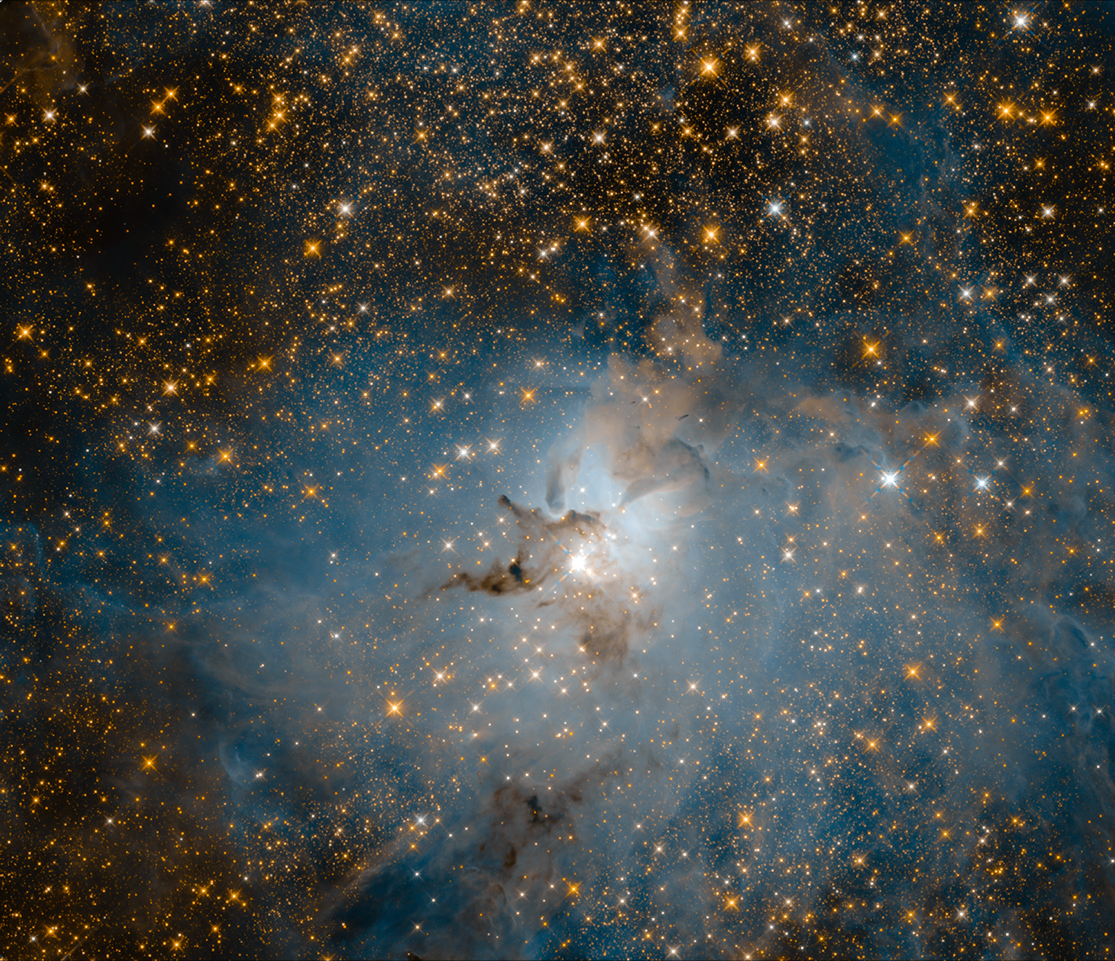 Two earlier blog posts describe what the Lagoon Nebula is, why it was a great target for Hubble’s 28th anniversary, and how the color composition and visualization was accomplished. See Celebrating Hubble’s 28th Anniversary and Deep Dive into the Lagoon. This post goes a bit further behind the scenes to get an idea of how such a Hubble observation is planned and executed, and how the raw data is processed prior to the steps described in the earlier blog posts.

There were earlier Hubble images of the Lagoon Nebula, but this new observation returns to this worthy target using Hubble’s latest cameras to go bigger and better than before. It notably adds the infrared component, which allows us to see right through the gas and dust to the stars hiding inside and behind the nebula. This provides a tantalizing hint at what the James Webb Space Telescope will be able to do for studies of star formation in infrared light.

Above: Slideshow switching between the visible light image of the Lagoon Nebula and the infrared image. Most of the stars can only be seen in the infrared.

Anyone who wishes to use Hubble must submit an initial (Phase I) observing proposal, using the Astronomers Proposal Tool (APT). A Phase I proposal describes the high-level goals of the observations, which instruments and filters will be used, and how many Hubble orbits are requested. Hubble orbits the Earth every 96 minutes, so it makes sense to dole out telescope time in these increments. But for most targets, only about half the time in each Hubble orbit is usable to observe the target. Why? Because in low-Earth orbit the Earth itself gets in the way. This Earth occultation time is never wasted though. It is spent conducting important calibration observations that keep Hubble’s instruments in peak condition. Most Hubble proposals are peer-reviewed annually by a Telescope Allocation Committee (TAC), with only about one out of seven proposals approved — stiff competition! A small number of proposals are submitted throughout the year as a direct appeal to the STScI director, who has discretionary telescope time, and that is how the Lagoon proposal was granted 16 orbits of precious Hubble time.

Dipping our toes in the Lagoon

After a Hubble proposal is approved, APT is again used to submit a more detailed (Phase II) observing program, where each orbit must be packed as efficiently as possible with the desired exposures. A large image like the Lagoon Nebula is made up of many more single exposures than you might imagine, and many trade-offs must be made in fitting them all into the allocated time. The Lagoon Nebula is so large that we requested four telescope pointings in a 2×2 mosaic pattern. In the graphic below, you can see that we still only covered a small part of the nebula. Hubble’s workhorse Wide Field Camera 3 (WFC3) was used for the primary mosaic of the center of the nebula. But WFC3 is actually two cameras in one, and a separate mosaic was obtained with both the visible light (UVIS) and infrared (IR) cameras of WFC3. But wait, it gets even better! A great feature of Hubble is that two science instruments can gather data at the same time. At essentially no additional cost, while WFC3 was gathering the primary mosaics at the center of the nebula, the Advanced Camera for Surveys (ACS) was gathering another mosaic in an adjacent or parallel field. And with a large nebula like the Lagoon, there is something fascinating going on in every direction. Who doesn’t like a freebie?

Above: A visualization of our Hubble imaging strategy. The three Hubble mosaics are overlayed on a ground-based image of the Lagoon Nebula. The WFC3 optical mosaic (UVIS camera) is indicated in blue, where thick overlaps are evident between the mosaic tiles. The smaller infrared mosaic (IR camera) can be seen within the larger UVIS mosaic (in red). At lower left, the parallel ACS mosaic is indicated in green.  A similar visualization can be created in APT with Aladin.

The UVIS mosaic was given oversized overlaps for a few reasons. It created a larger “sweet spot”  in the center of the mosaic where the most interesting compact structures reside — those cool “twisters” got four times the exposure depth! It also made the optical and infrared mosaics closer in size, since the IR detector has a smaller field of view. The number of exposures starts to pile up since at each mosaic pointing we must obtain multiple exposures with each filter, each with small shifts or “dithers” between them. Combining multiple dithered exposures allows us to reject detector artifacts and cosmic rays, and replace any bad pixels with good pixels from the other exposures. The overall data quality was very good, but suffers from some “ghosts” and “glint” caused by bright stars in the image or just outside of it. See Hubble Phase II program 15449 for the full details of this complex observation, including graphics that show how tightly packed each Hubble orbit is. 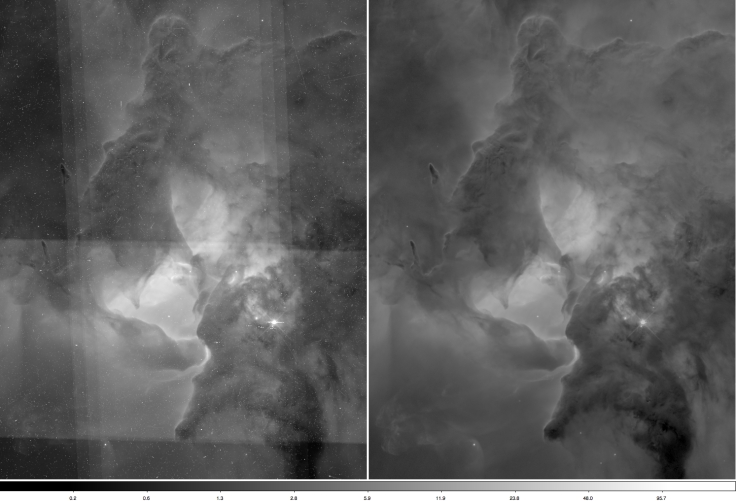 Above: Closeup of the center of the UVIS mosaic for one filter (F658N) before rejection of artifacts (left) and after (right). The thick tile overlaps are evident, as well as many artifacts and cosmic rays which are absent in the clean output image.

Putting the puzzle together

After the observations are conducted, the resulting raw data is processed through calibration pipelines and stored in the Barbara A. Mikulski Archive at Space Telescope (MAST). The standard archival data (in FITS format) for this program is like a puzzle in need of assembly. The exposures for each mosaic tile are automatically combined for each filter, but a complete mosaic of this size must be carefully aligned and combined by the user. The mosaic tiles must be aligned (using Gaia DR1) as described in a related blog post by Varun Bajaj. Then the images for each filter can be combined into a monolithic mosaic using a software tool called AstroDrizzle, which is a part of DrizzlePac. “Drizzling” is a powerful image combination method first developed for use on the Hubble Deep Field, which not only allows for assembling mosaics but can enhance the resolution of carefully dithered images.

Not just a pretty picture

Although the primary goal of the Lagoon Nebula observations was to produce an iconic image for Hubble’s 28th anniversary, the observing and data processing strategy reflects the same best practices that would be used for any science program. To enable scientific research with this remarkable data set, we have delivered our expertly prepared mosaics as High Level Science Products (HLSP) to MAST.  For more technical details on the data processing, see the README file for the Lagoon Nebula (also know as Messier 8 or M8). Again, this is the scientific data in FITS format. Curious students and amateur astronomers might enjoy manipulating these mosaics in a FITS image display tool  like ds9 to explore the full dynamic range of Hubble data and the fine details within the Lagoon Nebula. It is fascinating to simply blink between the visible and infrared images to watch the stars play hide and seek! FITS Liberator is also available for anyone who’d like to try their hand at making their own color composition with our data.

Above: An example of our High-Level Science Products (FITS data) displayed in SAOimage ds9. This is a “mega-mosaic” of the ACS parallel field (left) and the WFC3 primary field (right) in the F658N filter.

One thought on “Imaging the Lagoon Nebula with Hubble”