This image of the Crab Nebula from a recent Hubble press release packs a lot of information into a single picture. Five different wavelengths spanning nearly the entire breadth of the electromagnetic spectrum are present here. In this post, I’ll deconstruct the image and look at how it was put together… but first, a little history lesson and a primer on color in astronomical imagery.

A Brief History of the Crab

Light from the Crab Nebula takes about 6,500 years to reach Earth from its location in the constellation of Taurus the Bull. Working backwards from the expansion of the debris left over from the supernova explosion that produced the nebula, astronomers have determined that the progenitor star exploded around 1054 C.E. and was most likely seen by Chinese astronomers at that time. The nebula was first discovered by John Bevis in 1731 as well as by the comet hunter, Charles Messier. In fact, the Crab was the first object in Messier’s catalog, earning it the designation of Messier 1, or M1.  It was actually the 3rd Earle of Rosse, William Parsons, who gave the nebula its “Crab” moniker based on a generous interpretation of a hand drawing of Messier’s observations.

Some incredible facts about the Crab to keep in mind as you read on:

“Is that what it would look like with my own eyes if I could get close enough to it?” This question often pops up in discussions of the general appearance of astronomical imagery. The simple answer is “no.” Scratching the surface just a little deeper… even an image taken in optical wavelengths that perfectly overlaps with human vision still shows a “collection” of photons integrated over time. This imaging method is fundamentally different than the physiology of the human eye. Although the human eye has a remarkable dynamic range (the ability to adapt to both very low and very bright light), it is no match for a telescope’s ability to build up an image over time.

The best way to uncover how these objects “really” look is to find a dark-sky location and look at the Milky Way with your naked eye, or gaze intently at the sword of Orion and see if you can make out the faint smudge that is the Orion Nebula. In both cases, the faint smudges you see have been the subject of countless dramatic astrophotographs from amateur and professional astronomers alike. The light and the colors inherent in them are so faint that we simply can’t see it with our eyes, and so we have developed highly specialized, sensitive instruments better suited to the task of integrating light.

In thinking about color, let’s consider the more relatable example of an apple. A digital image of an apple, like the one seen below, is made on a sensor that is sensitive to light in three different optical “bands”: namely red, green, and blue. When added together in various intensities, these three colors allow us to reproduce all of the colors of the visible spectrum. In the example below, I’ve deconstructed the original color image into its three color channels. There’s not a lot of blue in an apple, so the blue channel appears mostly dark. Since there is plenty of red color in this apple, the red channel is brightest of the three, and where there are yellowish blotches on the apple (a combination of red and green), you see brighter spots in the green channel. 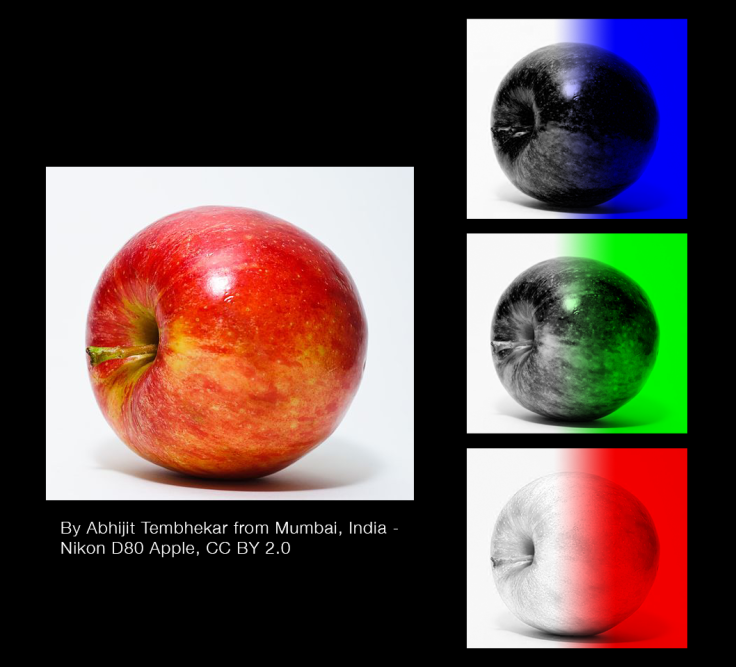 It really does work essentially the same way in astronomy. The main difference in terms of color is that when acquiring the image, astronomers have much finer control over exactly how much light from any given color range is present in an image. Astronomers often use something called “narrow band” filters to create images that sample a very small wavelength range of light. In our apple image, I was able to pull out the red channel and show just that image. In astronomy, I may want to look at one very narrow part of just that red channel and so I would use a filter to exclude all light except this one very specific part of the red channel.

Color images are then created by combining images made in those different filters and assigning red, green, and blue colors to each image in much the same way as our example apple. Things get a little more complicated when we introduce images made in wavelengths beyond human vision, but keep our mental model of the apple in mind as we progress.

A Crab of a Different Color

As our understanding of the electromagnetic spectrum has evolved over time, we have constructed ever more sensitive instruments that transcend human vision and give us a more complete view of the cosmos. Just as we harnessed the power of X-rays to provide a visual glimpse inside the human body, we can now use infrared light to penetrate the dust of the Milky Way and reveal the core of our galaxy! The challenge comes in being able to visually translate that information into something we can see. Check out chromoscope.net for a great interactive visualization of viewing the sky in different wavelengths.

In the case of the Crab Nebula, I was presented with five extremely detailed datasets showing the nebula in radio, infrared, optical, ultraviolet, and X-ray light.

Combining two or three images to create a color image is one thing, but five was going to be a real challenge!  At first I held on to some preconceived notions of what color each wavelength “should” have in a color composite and the results, although aesthetically pleasing to the eye, did not convey enough information. The colors were not representative of the data underneath, which would make it difficult to describe how color represents wavelength in the image.

It was time to practice what I preach about color! I decided to break the color wheel down into five segments and chromatically assign a color to each image and then combine them to create the composite image. That is to say, I intended to take the lowest energy, longest wavelength, radio image and assign it red, then move on to higher energy and shorter wavelength assigning bluer colors as I moved on. Quantitatively, this meant that I would divide the 360 degrees of the color wheel by 5, giving a step size of 72 degrees for each color.

Approaching color in this way, I arrived at a color palette for the image that allows each individual wavelength to show through while also creating a rich and vibrant image.

All It’s Crabbed Up to Be

We don’t spend all this time and energy devoting our lives to scientific endeavors just to make pretty pictures, so what do we learn from these data? In the journal paper that accompanied this press release, the authors provide a detailed analysis of the many morphological structures of the Crab across the spectrum. This, in turn,  provides clues to the physical processes creating them, contributing to a much deeper understanding of how the Crab came to be. To take just one example from the paper, when comparing incongruous structures seen in radio and optical wavelengths (red and yellow in the image below), astronomers are able to conclude that there are strong magnetic fields within the nebula constraining matter in much the same way that we see on our Sun in loops of plasmas known as “arcades.” These insights would not be possible were it not for the high quality data taken in different wavelengths.

As we’ll see time and again on Illuminated Universe, there is much more to the universe than the small sliver of the electromagnetic spectrum that we see with our eyes. Using the power and sensitivity of telescopes like the Hubble Space Telescope in conjunction with telescopes that focus on light beyond the visible realm, we are building a more complete picture of the cosmos and the forces that bind it together. Future missions like the James Webb Space Telescope will peer further into the universe than ever before, and will undoubtedly reveal deeper mysteries yet. In the meantime, watch as the Crab cycles through its many colors right before your eyes!

One thought on “The Kaleidoscopic Crab”