In 1998, a few years after the launch and the first mission to repair the Hubble Space Telescope, a number of astronomers at the Space Telescope Science Institute established the Hubble Heritage project. The main goal, among others, was to promote the visual qualities of Hubble images balanced with their science content. Over the years since, Heritage developed a gallery of the aesthetically best Hubble images. The Heritage Team produced most of these images from data obtained as part of Hubble’s science mission.

The Heritage Project was also able to use Hubble to obtain some additional data. Some of these observations were used to add to existing, archival data, so they could produce a visually better image. In other cases Heritage observed entirely new targets, adding to the gallery of spectacular results. But the goal always was to produce data that would be useful to enable scientific analysis in addition to their use in producing images.

Illuminated Universe would like to continue the Heritage mission by periodically highlighting these legacy images. We also expect to highlight additional new or existing images that may not otherwise get much attention. Also note that all of the images are available from HubbleSite, the primary source of information about the Hubble’s science mission.

Here are the images from the first Heritage release that included four examples of the range of astronomical subjects Hubble has observed routinely, from the Solar System to distant galaxies.

NASA’s Hubble Space Telescope has provided images of Saturn in many colors, from black-and-white, to orange, to blue, green, and red. But in this picture, image processing specialists have worked to provide a crisp, extremely accurate view of Saturn, which highlights the planet’s natural pastel colors. Bands of subtle color – yellows, browns, grays – distinguish differences in the clouds over Saturn, the second largest planet in the solar system.

Saturn’s high-altitude clouds are made of colorless ammonia ice. Above these clouds is a layer of haze or smog, produced when ultraviolet light from the sun shines on methane gas. The smog contributes to the planet’s subtle color variations. One of Saturn’s moons, Enceladus, is seen casting a shadow on the giant planet as it passes just above the ring system.

The flattened disk swirling around Saturn is the planet’s most recognizable feature, and this image displays it in sharp detail. This is the planet’s ring system, consisting mostly of chunks of water ice. Although it appears as if the disk is composed of only a few rings, it actually consists of tens of thousands of thin “ringlets.” This picture also shows the two classic divisions in the ring system. The narrow Encke Gap is nearest to the disk’s outer edge; the Cassini division is the wide gap near the center.

Scientists study Saturn and its ring system to gain insight into the birth of our solar system.

Hubble has observed Saturn many times since this image was produced. 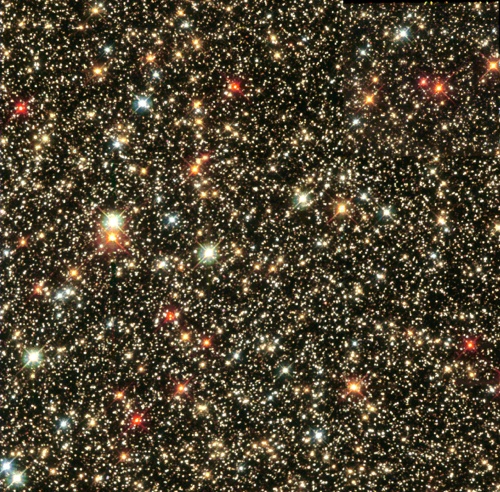 NASA’s Hubble Space Telescope has given us a keyhole view towards the heart of our Milky Way Galaxy, where a dazzling array of stars reside. Most of the view of our galaxy’s center is obscured by dust. Hubble peered into the Sagittarius Star Cloud, a narrow, dust-free region, providing this spectacular glimpse of a treasure chest full of stars. Some of these gems are among the oldest inhabitants of our galaxy. By studying the older stars that pack our Milky Way’s hub, scientists can learn more about the evolution of our galaxy.

Many of the brighter stars in this image show vivid colors. A star’s color reveals its temperature, one of its most vital statistics. Knowing a star’s temperature and the power of the star’s radiation allow scientists to make conclusions about its age and mass. Most blue stars are young and much hotter than our Sun. They consume their fuel much faster and live shorter lives than our Sun. Red stars come in two flavors: small stars and “red giants.” Smaller red stars generally have a temperature about half that of our Sun, consuming their fuel slowly and thus living the longest. Red giant stars are at the end of their lives because they have exhausted their fuel. Although many red giant stars may have been ordinary stars like our Sun, as they die they swell up in size, become much cooler, and are much more luminous than they were during the majority of their stellar life.

This image reveals an expanding shell of glowing gas surrounding a hot, massive star in our Milky Way Galaxy. This shell is being shaped by strong stellar winds of material and radiation produced by the bright star at the left, which is 10 to 20 times more massive than our Sun. These fierce winds are sculpting the surrounding material – composed of gas and dust – into the curve-shaped bubble. Astronomers have dubbed it the Bubble Nebula (NGC 7635). The nebula is 10 light-years across, more than twice the distance from Earth to the nearest star. Only part of the bubble is visible in this image. The glowing gas in the lower right-hand corner is a dense region of material that is getting blasted by radiation from the Bubble Nebula’s massive star. The radiation is eating into the gas, creating finger-like features. This interaction also heats up the gas, causing it to glow.

The Heritage Team used data from Hubble’s first generation camera, WF/PC to produce this image of the Bubble Nebula. Astronauts replaced WF/PC with WFPC2 during a Space Shuttle mission to service Hubble in 1993.

What may first appear as a sunny side up egg is actually Hubble’s face-on photograph of the small spiral galaxy NGC 7742. But NGC 7742 is not a run-of-the-mill spiral galaxy. In fact, this spiral is known to be a Seyfert 2 galaxy, a type of active galaxy that is powered by a black hole in its core. The core of NGC 7742 is the large yellow “yolk” in the center of the image. The lumpy, thick ring around this core is an area of active starbirth. The ring is about 3,000 light-years from the core. Tightly wound spiral arms also are faintly visible. Surrounding the inner ring is a wispy band of material, which is probably the remains of a once very active stellar breeding ground.